y name Elizaveta Lipovenko. Cattery Ermine Trace ("След горностая") I registered in April 2005 in International Felinological Center "Felis". "Felis" is one of the oldest felinological clubs in Russia. The club's president, Olga Abramova, became my first teacher and a guide to the world of felinology. Even then, the British silver chinchillas were the subject of legitimate pride of "Felis", and now this club still has the strongest Russian cats breeding school in this complex color.

Ermine Trace was started as a small monobreed cattery, but in fact, since 2009, it began to work as a collective. Thanks to the participation in the work of Anna Galaeva, besides the British cats, representatives of the Scottish breed also appeared in the cattery. Now Ermine Trace has three branches in Moscow and the Moscow region - in Odintsovo (Anna Markova), Scherbinka (Elizaveta Lipovenko), Zelenograd (Anna Galaeva). 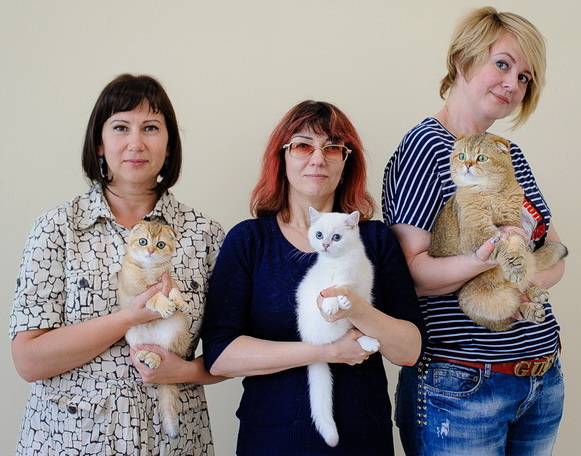 Initially, the work of the cattery was conducted exclusively in the traditional shaded silver, but over time the palette of colors was enriched, their genetic bases became more diverse. In 2010, in addition to WCF club registration, the cattery was also registered in the Assolux reg. № 4387.

The ancestor of the cattery was a wonderful German cater, WCF world champion Eric von Bürgersruh, the owner of a rare color silver chinchilla (ns 12). He came from Germany as an adult, give a large number of litters and introduced the gene cs into the population, thanks to which the blue-eyed kittens of the chinchilla point color appeared for the first time in the cattery.

The first brides of Eric were British silver chinchillas from the cattery Pearl of Empire, as well as their descendants. In 2009, from Austria came to us a silver shaded kitty Schönweg Camila Blanchefleur, this marked the beginning of our long cooperation with the Austrian cattery Schönweg. In the same year, from the mating of Eric with Lensky Abbatisse Isadora, the cat of the Scottish fold of the silver-shaded-point color, the first Scottish litter was discovered, which opened the second line of work for Ermine Trace – the breeding of Scottish Fold cats ns 11 (12) and ns 11 12) 33.

In 2010, a young producer appeared in the cattery – Viva Vogue Happy Christmas. With the help of Happy, we noticeably changed the situation with the shape and color of our cats' eyes and almost forgot what a yellow-eyed chinchilla or chinchilla with olive (greenish-brown) eyes is.

At the end of 2011, it was decided to work also with the gold range of colors in the most promising option for today – golden ticked, and soon we had the first representatives of this group of colors: a golden ticked cat Queenly Gold from cattery My-Mirage and genetically ticked cater Karl-Friedrich from Kalipco with rare color golden chinchilla. In 2012, we came to another cat-producer of coloring – Lara-Cat Caitlin, and was continued a work with Austria lines Schönweg as in the British, and in the Scottish breeding program. Several descendants were obtained from the mating of our British cats with the beautiful cater Schönweg Ocean in Love, in addition, the cattery received several interesting silvery producers in the usual and color-point variants thanks to the joint work with the cattery My-Mirage.

In 2016, the daughter of her graduate Ermine Trace Thadee, Ange-Beauty Nika Luxury, owner of amazing blue eyes, came from Moldova to Zelenograd to breeder Anna Galaeva and took part in the further development of the silver-shaded-point direction. At the same time, at the end of 2016, an unexpected happened: from a couple of our producers Schönweg Teodoro and Ermine Trace Olwen, great-great-granddaughters of Eric and Schönweg Camila Blanchefleur, was born exclusive cat Ermine Trace Nadeya, which at standard color ns 11 had not green, but bright blue eyes, like the eyes of color-points. Nadeya was left in the cattery in order to find out the nature of inheritance of the trait and, if possible, attempts to obtain a breed group of silver chinchillas not with greens, as is usually the case, but with blue or blue eyes. The combination of a cold shade of wool of non-color-point silver chinchillas with cold blue and blue shades of eyes should be no less profitable than the combination of the same wool with warmer green.

In 2018 this work gave the first fruits: Nadeya gave birth to two kittens having eyes of different colors – one blue, the other green. Of course, these kittens also stayed with us and hopefully will soon give us answers to questions about what a new gene has appeared in our cattery and where from.

We actively continue to work with the color of the chinchilla point, both in gold and silver. In the future, it is possible to expand the "color gamut" due to the appearance in the cattery of not only genetically black, but also blue, chocolate, lilac chinchillas. As always, the selection of the best graduates is ahead, the selection of pairs for them and the continuation of the exciting classes - improvements two of our favorite breeds, British and Scottish, in the work with a group of the most beautiful colors that are not accidentally called precious.

You can get better acquainted with our cats and cats on the pages of "Caters" and "Cats", and learn the latest news on kittens looking for new owners on the page "Kittens". In addition, the site has a section "Photo", where you can see pictures of kittens from previous litters, as well as their parents. To learn how to contact us, go to the "Contacts" page. In addition, the cattery has groups in popular social networks, where we also regularly are.